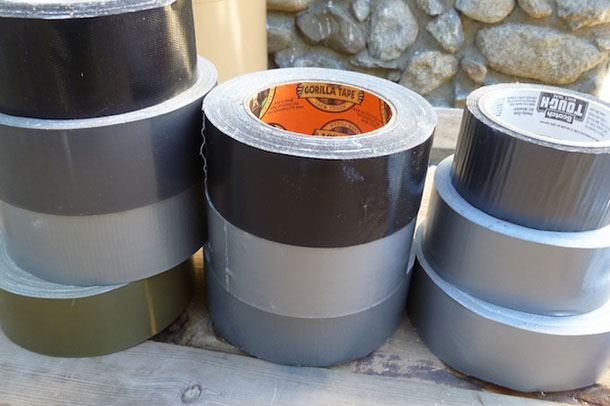 Through our research, and backed up by our firsthand testing, we found that a good general use duct tape should be around 11 milli-inches (mil) thick, use a natural rubber-based adhesive, and be made using a co-extrusion process.

Before getting into these specifics, it helps to know a bit about the three ingredients that make up a piece of duct tape: a polyethylene sheet backing, a cloth grid, and a rubber-based adhesive.

The polyethylene sheet plays two roles: It serves as a bonding area for the other two ingredients and creates a waterproof backing. It’s basically a sheet of plastic.

The cloth grid (or scrim)—typically made of polyester or a cotton/polyester blend—decides the tape’s strength, flexibility, and tearability. The threads that run the length of the tape are what give it its material strength—how much weight the tape can hold before breaking. The threads that run across the tape determine its tearability. Duct tape tears along the thread line, so the smaller the space between threads, the cleaner the tear. If the threads are far apart, getting a straight, even tear is difficult. It’s like holding one edge of a piece of paper while trying to rip it down the center.

All true duct tape has a rubber-based adhesive, but each tape has its own adhesive recipe. Some are thicker and flow better in order to stick to rough porous surfaces, while others are stiffer, making them more stable for extreme temperatures and flat surfaces. As we found out in our testing, some adhesives are so gooey that they’ll melt in the hot sun. Some tapes are made with alternatives to rubber-based glues, but those tapes (often made with what’s known as hot melt adhesive) are less reliable in extreme temperatures, and they don’t have the strength of the rubber-based glues, so we dismissed those.

After many conversations with four prominent duct tape manufacturers (and confirmed through our testing), we’re convinced a process called coextrusion is the best way to assemble these three ingredients. The defining characteristic of coextrusion is that the polyethylene sheet enters the manufacturing process in molten form. This means that when the cloth grid is added, it melts directly into the plastic, forming a single, fully bonded piece. The rubber adhesive is then applied to one side, creating what we know as duct tape.

The other way to make duct tape is called lamination. It’s easier to do, but there are issues with the finished product. As Hillary DuMoulin, communications manager at Berry Plastics, explained to us, lamination involves pressing all three ingredients together. The cloth grid is held to the poly either by a separate laminating adhesive or the “squish-through” method, where the rubber-based adhesive holds everything together.

The problem with lamination is the poly/scrim connection is nowhere near as secure as it is with the coextrusion method. Air bubbles can form between the laminated layers. Over time, particularly during exterior use, the poly and scrim can come apart. If you’ve ever pulled off an old piece of duct tape and the cloth grid remained stuck in a crusty bed of adhesive, you’ve seen the major flaw of a laminated tape. With a co-extruded tape, the scrim is really an internal component of the poly, so this kind of separation doesn’t occur.

There are visual ways to distinguish a laminated tape from a co-extruded one. The most telling is that co-extruded tapes have very small, clearly defined dimples on the exterior of the roll. These correspond with gaps in the cloth grid and represent all of the places where potential air bubbles could form if the tape were laminated. It’s harder to see on high-end tapes because as the tape quality increases, the grid gets smaller and dimples become difficult for the eye to pick up.

Another way to visually tell the difference is that laminated tapes (at least the two that we tested) have a wrinkled texture. On one tape, the ridges were so extreme that we were unable to get it to sit flat against any surface for more than a day or so. Co-extruded tapes have a nice smooth finish.

For thickness, we found that tapes around the 11-mil range offered the best compromise between strength and maneuverability. Thickness is measured in “mils” (or milli-inches, roughly .0254 millimeters) and tapes vary from as thin as 3 mils to as thick as 17 mils. Thinner tapes are too floppy to handle. Trying to wrap a thin, flimsy, wet noodle piece of duct tape can become a frustrating experience as it constantly folds over and sticks to itself. Once this happens, especially if it’s adhesive to adhesive, it’s pretty much a permanent bond, so you have to discard the piece and start over.

But thick tapes have their own drawbacks. The beefier they are, the less flexibility and conformity they have. During testing, we found that this negative outweighed the added strength of the really thick tapes, like the 17-mil Gorilla. Those tapes are extremely strong, but it’s very difficult to wrap a piece around a contoured surface (like the floppy sole on an old work boot, or the 90-degree elbow of a copper water pipe). This lack of flexibility also causes problems if you’re bundling something together with the tape. It’s much better if you can give the tape a strong pull and add a little stretch to it as you’re adhering it. This little bit of flexibility, which tapes around 11-mil usually have, can add just enough tension to secure the whole bundle together. This kind of stretching is nearly impossible to do with a thick 17-mil tape.

Other handling characteristics play a role in performance. Berry Plastics’ Hillary DuMoulin, told us that tearability, “finger tack,” and the ability to unwind are all important in evaluating duct tape. So during testing, we took these factors into account as well.

What’s not as important are width and length. The standard roll of duct tape is 2 inches wide (it actually measures around 1.88 inches but is always referred to as 2 inches). Other sizes are available, but even after 10 years in the construction industry, I’ve never needed anything more than a 2-inch roll. The lengths of the rolls are also standardized. The rolls I looked at were a variety of 35, 40, 45, and 60 yards. (45 and 60 yards are the most common lengths.)

Good, high-quality tapes designed for general purpose sit in the $8 to $13 range. You can get cheap and poorly made stuff for less, but it’s not worth saving the couple bucks unless it’s for a really simple and temporary job like sealing garbage bags or wrapping rolls of pulled-up carpeting. You can also get more aggressive tapes loaded with turbo strength and crazy adhesive that can cost over $20, but you probably don’t need that strength and you definitely don’t need the frustration that comes with working with tape that’s too thick and too sticky.

There is a dizzying variety of available duct tapes—Berry Plastics alone sells roughly 35 different types of duct tape under the Nashua and Polyken names—so after our research, we asked the major brands (Intertape, Duck, Scotch, Nashua, and Polyken) to suggest their best product for general all-around use. To give them a sense of what we had in mind, we gave the examples of patching a bike seat, repairing a backpack, and fixing a leak in a hose. Each company came back to us with a tape in the 9-to-11–mil range. In addition, we tested a number of tapes from these manufacturers based on reputation and customer feedback. These were typically thicker tapes and ones that tended to have specific strengths (and, as we discovered, specific weaknesses). We tested a total of 10 tapes.

via Wirecutter: Reviews for the Real World
The Best Duct Tape