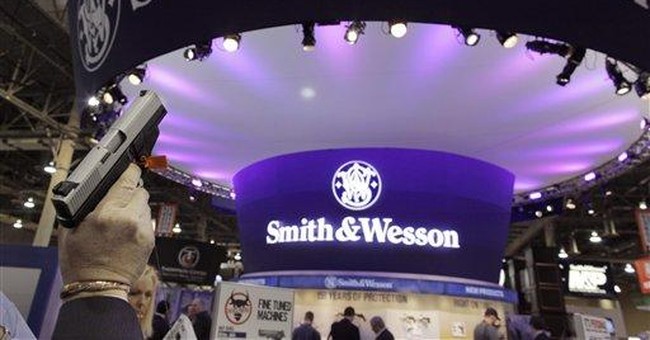 A while back, a group of activists bought shares of Smith & Wesson to try and force the company into what they saw as a more socially responsible direction.

Of course, that’s all a bunch of male bovine excrement, but what else do we expect from anti-gunners?

What they accomplished was to push the company to conduct a study on product safety, which was supposedly a major victory.

Well, Smith & Wesson conducted the study, and it’s unlikely the activists will like it.

The group called Adrian Dominican Sisters, led by a nun named Sister Judy Byron, is part of the Northwest Coalition for Responsible Investments, an anti-Second Amendment activist group. Their latest target was American Outdoor Brands Corporation (AOBC), which owns Smith & Wesson. The company was forced to do a study, which was released late Friday, but the results likely won’t make the nuns happy.

In their report, AOBC defended itself against critics of the Second Amendment, writing, “Specific terms sometimes are used to craft a narrative in support of those agendas. For example, phrases such as ‘gun violence’ are used to create a perception that the presence of a gun, in itself, somehow creates the conditions for violence.”

AOBC is one of two firearm manufacturers the activists bought stock in for the expressed purpose of forcing a “dialogue with the companies about what they are doing to ensure the safety of children and communities whose lives may be at risk because of their products.”

One of the areas the activist nuns wanted addressed was the idea of “smart guns,” weapons that can only be fired by one user. AOBC called this “flawed technology” in the report, saying they would continue to monitor its development.

“AOBC does not believe that current authorized user or ‘smart gun’ technology is reliable, commercially viable, or has any significant consumer demand,” the report read. (RELATED: House To Move Forward With Gun Control Proposals)

The report also points out that the activists represented a small percentage of its shareholders.

Still, they were enough to push for the study to be done in the first place, so it’s probably wise not to dismiss them entirely. Of course, this is also probably why it’s a good idea for pro-Second Amendment activists to step up and invest in gun companies. There’s no reason to allow anti-gunners to infect these companies and steer them in the wrong direction.

The anti-gunners’ victories last year, while small, was enough to embolden them and likely made some decide to join their ranks. It’s time to play a little defense and let these gun grabbers learn that there are a lot more of us than there are of them in the next corporate meeting.